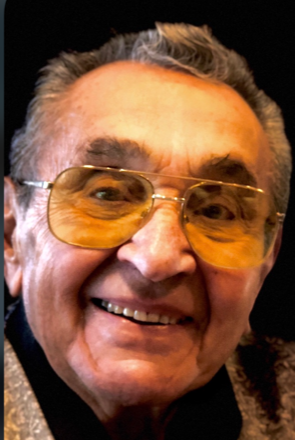 In Celebration of the Life of

In a year that saw the Macy’s Thanksgiving Day Parade, the Wrigley Building in Chicago is completed, the first regular airmail services start in the USA, first ever Winter Olympics in France, and IBM Corporation was founded. 1924 was a year for iconic American and global events.  That summer, on New York City’s Upper East Side, a pair of Ellis Island immigrants from Bari, Italy were about to have their own iconic American event.  Luke Nicholas Gasparre was born on July 20, 1924, and New York City would never be the same. Luke grew up on the “Roaring ’20s” streets of New York with his 4 brothers and 2 sisters, moving to Astoria, Queens when he was 14.  Astoria would become the place he would spend the next eight decades of his life.  Where he would raise 3 children – Augustine, RoseAnna, and Luke – 5 grandchildren, and 4 great-grandchildren.

At 18, in a time of unimaginable global fear and anxiety, Luke was called to service in the United States Army.  Everything about service to country, fighting for something bigger than himself, and being the underdog appealed to Luke.  Luke Nicholas Gasparre was never happier than when the American Flag was affixed on his shoulder.  He left the safe confines of New York, headed for the fight.  And a fight he found.  It’s a legendary battle now, 75 years later, but then the Battle of the Bulge was just a “cold as hell, froze my ass off” kind of time for PFC Gasparre.  In a particularly treacherous moment, Luke was separated from his unit and had to take cover in a trench and hiding behind trees from Nazis trying to kill and capture any member of the Allied invasion.  Freezing and alone, with his hands in his pockets for warmth, he was shot.  Right through his right hand and into his thigh.  To hear him tell this story years later, he tells it with an off-color joke as to how bad that situation COULD have been…had he not had his hand in his pocket…. protecting his groin.  “I’ll tell ya what…. Ro wouldn’t be here now if my hands weren’t in my pockets!”  Told with a sly twinkle in his eye, followed by a good belly laugh.

When the Americans found him, they were cautious about his identity.  So, in true Luke fashion, one that stands today if you ever got a voicemail from him – “I’m Luke Gasparre – G A S P A R R E – Astoria Queens New York”.  As an extra measure of proof and to show he wasn’t messing around and wanted to get the hell out of there, he added “Yankee Stadium, 161st ST, Bronx New York”.  And with that, he was on his way home. Once a New Yorker, always a New Yorker.

After the war, Luke continued his service to his nation for 34 years at the United States Postal Service.  Never one to dilly dally, he concurrently worked as an usher for the New York Mets and US Open for 54 years, retiring in the summer of 2018.

Luke became the American Ambassador for the city of New York.  And for our huge and very patriotic military and veterans’ communities, he was the stuff of legends. Always donning his WW2 uniform, medals proudly affixed to the left chest, Bronze Star first, Purple Heart second, PFC patch on his right shoulder.  Everyone has a Luke story, whether at games, or parades, or Piccolo’s, or one of those fabled birthday parties thrown by his family.  The man was a celebrity and absolutely adored by his family

Luke was the kind of light we don’t see anymore.  The kind of unabashed, unafraid, open-hearted tap-dancing kid from a throwback era impervious to apathy, exhaustion, and jadedness that’s all too commonplace.  For those of us that knew and loved him, our lives will always be a little dimmer.  Our events will always be missing that “thing” that made them a little extra special.  For his family, there is a patriarchal void that can never be filled.  But for all of us, in this moment of incomprehensible sadness and pain, the one thing we will all take solace in knowing, is that he squeezed out every last drop of love and life that a man can ever hope to have.  And he did it…his way.

The Gasparre Family would like to thank you all for the years of friendship and the endless love that you gave throughout Luke’s life.

Each and every one of you have held a very special place in his heart.

Thank you and may God bless you all.

Riccardo’s By the Bridge

To leave a condolence, you can first sign into Facebook or fill out the below form with your name and email. [fbl_login_button redirect="https://www.dragofuneralhome.com/obituary/luke-n-gasparre/?modal=light-candle" hide_if_logged="" size="medium" type="login_with" show_face="true"]
×