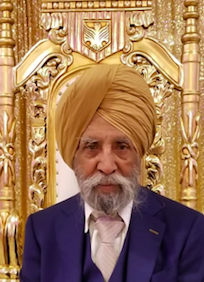 Satpaul “Pal” Singh left for his heavenly abode on Thursday, Nov 28, 2019, after a period of being ill.

Pal was born on July 15th, 1938 in Lahore, Punjab to Ranjit Singh and Gurdip Kaur.  He was the 3rd of six children: the eldest of 3 brothers.  His dad would refer to him as his “ludan putar.”  When he was just 16, his father retired and Pal lifted his family onto his shoulders.

He married his loving wife, Harsharan Kaur on July 28, 1974. Pal often referred to his wife lovingly as, “Rano.” Their isn’t anything he wouldn’t do for his beloved Rano.  Pal and Rano, shared 45 years of marriage together and in those years they had many beautiful memories,  and adventures together.

He immigrated from India to Michigan, USA  Oct 31, 1975.  His life’s journey eventually brought them to Astoria, New York where they settled down for the rest of their lives beginning in the early 80s.   Pal loved New York and the city’s hustle and bustle.

Satpaul worked in many fields, but law was his passion.  He practiced immigration law with immense interest and helped many people attain their dreams.  He had a unique ability to have a conversation with anyone on any topic.  Satpaul enjoyed spending time with his family and engaged in regular community service at the various Gurdwaras in New York. He was a big lover of Bollywood movies and songs, and made all his children watch them as they grew up.  His ability to recall specifics of movies, from directors to music directors was unmatched.  Watching the Knicks was another favorite pastime of his, as was watching and dancing to Indian songs while joking with his Rano.

He always offered great advice to friends and families and helped countless people around the globe.  He will be dearly missed.

He joins his parents, sisters Narinder and Surinder in the afterlife.

He is survived by his beloved wife and his brothers Karanjit and Karamjit, his sister Babli, his daughters Sonu and Monika; sons Raja and Gulu and their respective spouses and his grandchildren Sofia, Ekam, Saij and Ryan.

In lieu of flowers please donate to a charity of your choice in memory of Satpaul Singh or donate to American kidney fund to which the link is listed below.

To leave a condolence, you can first sign into Facebook or fill out the below form with your name and email. [fbl_login_button redirect="https://www.dragofuneralhome.com/obituary/satpaul-singh/?modal=light-candle" hide_if_logged="" size="medium" type="login_with" show_face="true"]
×